Marcus is studying life science this year, and for the past two weeks has been studying cells. He was challenged to make his own cell model in any form he chose. He thought a cell cake sounded like the most fun. 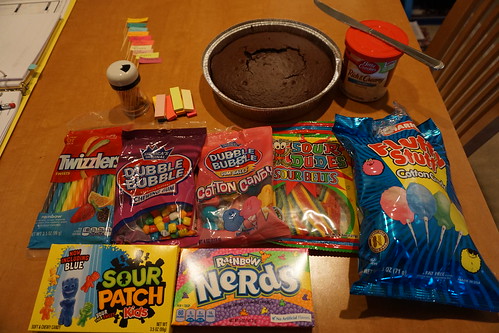 Marcus used the following supplies for his cell cake: 1. A cake mix (any flavor, ours was devil’s food) 2. A round cake pan (8″ or 9″. Ours was 9″ from the dollar store) 3. White frosting and a butter knife or spreader 4. Various candies (He chose from the selection at the dollar store) 5. Toothpicks 6. Sticky tabs 7. A diagram of a labeled cell model, as a reference. We used the one in his science book, but a google search works too. 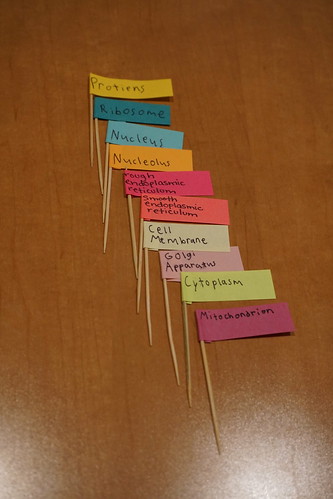 The first thing we did, of course, was make up the cake. We did end up baking two 9″ cakes as we thought there was too much batter for just one. While the cake was cooling, Marcus made up little flag labels for his cell cake, using the sticky tabs and the toothpicks. He simply used the sticky part of the tabs to wrap around the toothpick, holding it in place. (He did ask me to write two of the cell parts as they were three words each, and he thought he couldn’t write small enough.) One thing Marcus did that I thought was helpful to him was to place each flag label on the candy he would use to make up the corresponding element. 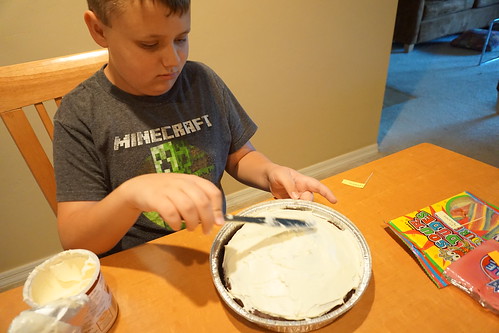 Once the cake was completely cooled, he frosted it with vanilla frosting. 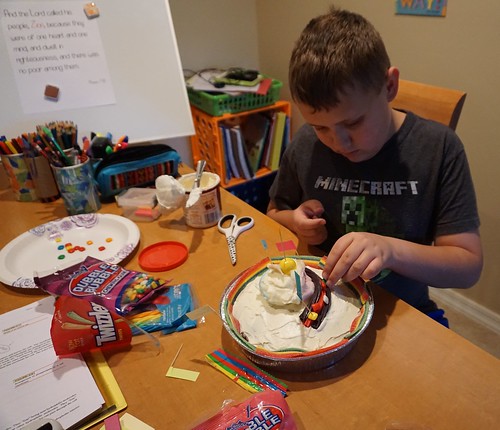 Then he set about creating each element that he was including on his cell model and placing them one by one on his frosted cake. He inserted the flags where they belonged and…

Ta-da! He now had a cell cake! (This was a model of an animal cell by the way.)