Today my son was a youth speaker at church. He had been asked to speak about our example and influence on others. He started out by sharing a story I gave him permission to use and that story is one of my 52 Stories for this year: 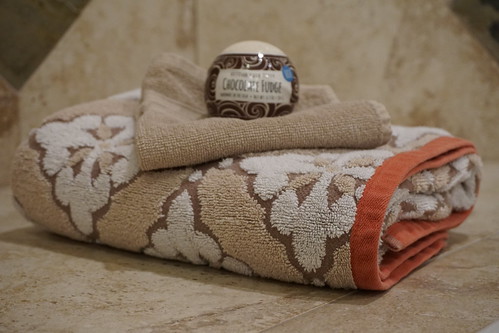 When I was a newlywed I developed my own way of folding towels, which was funny because I had never cared how towels were folded before, even though I had been responsible for most of the laundry in my childhood home. I don’t even remember how I folded my family’s towels. I do have a memory of sitting on a chair in the middle of our laundry room, in an unfinished basement (where I used to roller skate and pretend I was Olivia Newton-John in Xanadu), reading a Nancy Drew mystery while I waited for the washer and dryer to finish.

For whatever reason, after I married I became quite particular about how our towels were folded and put away. Each fold was precise until the towel ended up ever so neatly into thirds and then they had to face a certain way in the linen closet. If my husband tried to be helpful by folding the towels, I would quietly refold them when he wasn’t looking.

Then our first child, Zachary, came along and my husband was often out of town on business trips. During Zach’s first year, one of my closest friends from high school ended up living with us temporarily. She needed a place to stay for a while and I was happy to have her as company. I probably drove her a little crazy because I would worry over her like a mother hen whenever she was out late, either working or on a date, but we actually got along beautifully during that time.

Naturally I trained my friend in my art of towel folding as she was often helpful with the housework and taking care of baby Zach. I have the sweetest pictures of her playing on the floor with Zach. She adored him and was like an aunt to him.

Fast forward several years later. As we added more children to our family, I finally gave up my obsession with towel folding. Honestly, I was just happy to get the towels from the dryer to the linen closet!

One day I visited this same friend at her house. By this time she had married and had two darling daughters of her own. I wanted to help her tidy up and saw an opportunity to fold some freshly laundered towels. I asked her how she folded her towels so that I could fold them the same way she did. She gave me this curious look before replying, “Camie, I fold them the way you taught me.”

Wow! I was not expecting that! I had never thought much about my influence on my friend until that moment.

I just want to share some advice that my church gives our youth, which Marcus included in his talk: We have a For the Strength of Youth pamphlet and under the friend section it reads:

“Everyone needs good and true friends. They will be a great strength and blessing to you. They will influence how you think and act, and even help determine the person you will become.”

Each of my friends have influenced me in different ways and they are a part of who I am today. Some of them have motivated me to try new things and this friend from the story got me hooked on romance novels, which I still enjoy to this day. I am thankful for each friendship I’ve had throughout my life. A good friend is truly a blessing.

♥ Do you have a story about friendship and their example and influence on your life? I’d love to hear it. ♥