On Tuesday morning, dark and early (haha), we drove the two hours to the airport, listening to Piano Guys the whole way while the kids slept in the car. It was drizzling rain. As soon as we walked into terminal 2, we saw at least three sets of families, encircled about their young missionaries. We knew they were missionaries, even though they didn’t have their name tags yet (they receive those in the MTC), because they were all young men or women, dressed in their Sunday best and their moms were weepy. And we were in the Salt Lake airport where LDS missionaries fly in and out all the time. (It’s fun to watch the reunions- welcome home posters, cameras out, lots of hugging and laughter.) 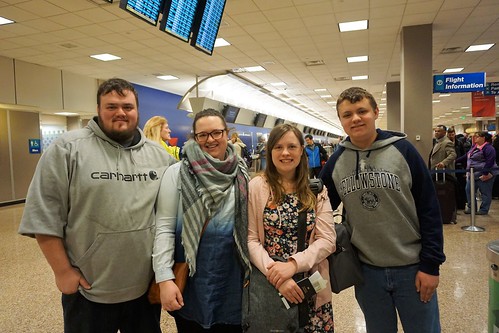 After checking in her suitcases, we gave Marissa our last hugs for eighteen months. Darcie, her big sister, and I, became emotional at that point. We then watched her go through security, losing sight of her from time to time as she wove back and forth. She’s such a tiny person. Finally, we couldn’t see her any longer and had to assume she’d made it through. On the way home, we stopped at IHOP for breakfast. It was a good morning for Red Velvet pancakes. Marissa then phoned us from the airport, using a calling card, and told us she had met three more sister missionaries, also going to Peru. That was very comforting to know. 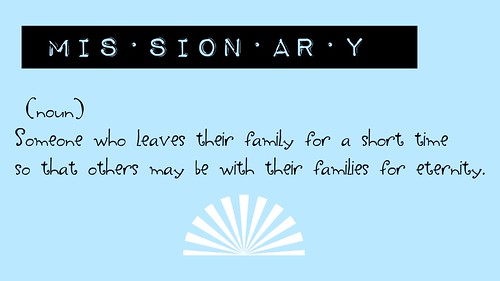 She sent me a brief e-mail today letting me know she’d made it and was safe. She told me she directed the other missionaries through the Atlanta airport, which she was familiar with, thanks to all our travels by plane. She also was the only one who expected the humidity of Lima. She said the MTC (missionary training center) was “nice” and that she might get lost. I wonder how big it is? She will be there learning Spanish and being trained in all-things-missionary for the next six to eight weeks. Her p-days (preparation days) are Wednesdays so that will be the day each week when she can write me and others. The sweet thing about being a missionary mom is that we take priority. So if she only has time for one e-mail, I get it! Also, missionaries are only allowed to phone home on Mother’s Day and Christmas Day.

♥ On Monday night, Marissa was set apart by our stake president, with her dad and her big brother in the Priesthood circle. She was given a beautiful blessing and the spirit was so strong in our home. I have a testimony of missionary work and of this gospel. I know my baby girl is going to bless many lives in the next eighteen months as she serves the Lord full time. Thanks for reading! ♥