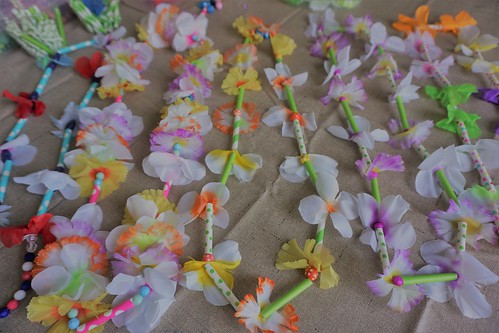 I’ve been hosting little girl mini craft parties all month long. This week the girls in my crafting club made leis. I thought they turned out pretty cute.

These craft parties all began with a Christmas craft party my daughters and I hosted back in December 2015 with five neighbor girls. They made birthstone ornaments, snow globes, and decorated sugar cookies.

That party led us to host more craft parties, usually around a holiday or in the summer months, and with each party we held, another girl or a couple more girls would join us. Each party would be three to four hours long and include lunch or dinner. And they were a blast for everyone involved.

This summer I decided to host mini craft parties once a week in June. They were two hours long and held in my new craft room. I chose one simple craft per session and included a snack, which the moms of the girls provided as a contribution. I had to hold two separate sessions, one in the morning and one in the afternoon to accommodate all of the girls as my craft room comfortably seats 10 at my table. This turned out to be a brilliant idea because I started this summer with 13 girls and I now have 19 girls in my craft club. 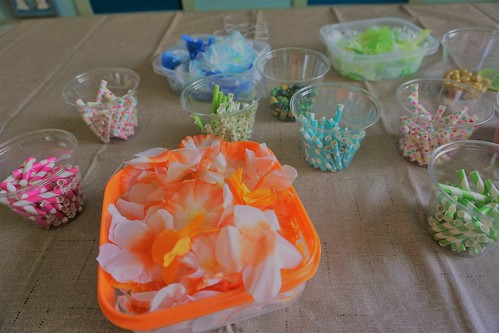 We ended June’s crafting with lei making and these are the supplies we used: 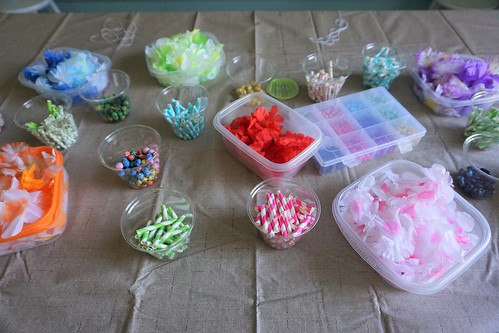 My preparation for this craft included taking apart the party leis and separating the flowers by color. I then cut the paper straws by fourths or fifths so that each straw came out to be 1.5″ to 2″ long. I cut the string to 40″ lengths. That seemed to work out just right for a medium-length lei after tying off the ends.

I had each girl tie a bead at the end of her string as she was beginning and most of the girls used a sewing needle to thread the flowers, beads and straws onto their strings. Most of the girls chose a flower-straw-flower-straw pattern, and some girls inserted beads after each flower or on each end of the straws.

♥ The finishing touch was having the girls make cards for each lei recipient. These leis and cards were given to grandmothers and cancer patients in our neighborhood. Some of the moms were willing to take their daughters to deliver these in person. ♥ From feedback received by some of the girls and their moms, I’ve decided to continue my weekly craft parties in July, with a break for the holiday week of the 4th. ♥