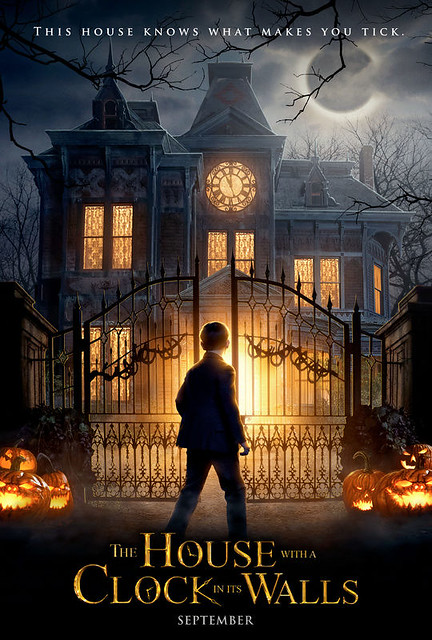 My daughter and I saw this movie with a friend and her daughter, right after it came to theaters. Our verdict? We were hooked the entire time. It was a jumbled mix of creepy mild horror (see my age recommendations below), magical high jinks, and laugh-out-loud humor.

This movie is a Universal and Amblin Entertainment effort and stars Jack Black and Cate Blanchett. It has elements of Goosebumps and Harry Potter, with a sprinkling of Matilda. It is rated PG and according to Parent Previews, has five lines with mild profanity (somehow I missed three of them). Otherwise, I call it a clean family movie, as long as the children watching it can handle the darker side of the movie.

Because of the mild horror, I definitely do not recommend this movie for any child under the age of ten, and even then, parents should consider their child’s sensitivity to a dark evil villain. It’s the villain’s creepy backstory (told through flashbacks) and eventual reappearance which make the movie edge-of-seat scary for children and some adults (for me, this is as scary as I like to get). My friend’s daughter is ten and she sat next to me during the movie. She hid her face in her jacket a couple of times, and came away claiming the return of the villain scared her the most. Luckily, she did not suffer from nightmares afterwards.

The basic plot line is that a ten-year old boy named Lewis is sent to live with his unconventional uncle Jonathon after his parents pass away, and soon discovers that both his uncle and his uncle’s house are hiding secrets. Lewis also meets his uncle’s neighbor and best friend, Florence. Much of the humor comes from the biting, friendly banter between Jonathon (Jack Black) and Florence (Cate Blanchett). I have to say that I found their performances to be great fits for their characters.

If you are a fan of Jack Black and Goosebumps, you will enjoy this movie. I personally found it worth seeing and would add it to my movie collection. Plus, it’s perfect for the Halloween season. 🙂